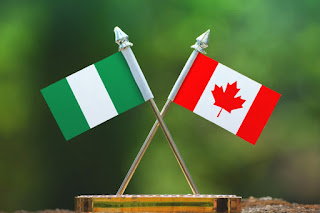 As the youths protest in Nigeria against the brutality of the special anti-crime unit of the Nigerian Police force known as SARS  reaches day 6, the Nigerians in Canada has planned to embark on a Canada wide protest to add their voices in diaspora to the agitations of the Nigerian youths. The situation in Nigeria is getting out of hand and the youths have decided to rise against the armed men who are supposed to protect them but molesting and oppressing them.
The organizers of the rally started out via a WhatsApp group sending out a clarion call to all interested participants and the response was overwhelming, within 48 hours of the idea they had to move to telegram platform to accommodate the interested selfless members who yielded to the clarion call.One of the forerunners of the protest, Dr. Chidi a renowned activist and a revolution Now frontier described the move as a necessity, he said he is happy that Nigerian youths are now rising to the true call of their purpose. He said, we feel your pains despite we are in Canada, but be rest assured that we will give you all supports needed. 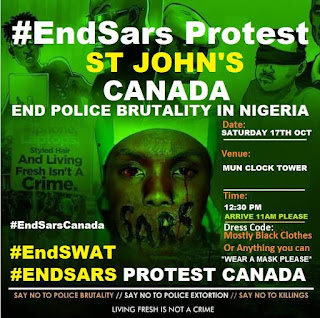 Ebbie one of the organizers described the protest as just the beginning of more agitations, most importantly for good quality governance. The president of the Nigerian Canadian Association, Lady Kemi Amusan, when reached on the development said it was a right step at the right time, she vowed to mobilize more people to join the movement and ensure a peaceful and successful protest was held. 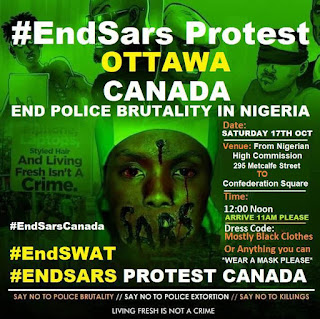 In a chat with an advocate for cultural integration and event consultant, the CEO of Iyameto productions Ch. Ms. Funmi Olumade, she described the solidarity protest as a sacrifice for our children and the future of the Nation, she said she will be attending the protest in person against her tight personal schedule. Popular media houses in Canada like Nigerian Canadian Newspaper, GBKM FM, Yatiny communications, Worship media, JHS studios, MOA news, Diamond vision entertainment network, network, Starboad Entertainment and Xphrame media has also thrown their support towards the protest to ensure  maximum publicity. The protest will be holding on the 17TH October 2020 in various cities in different provinces. Scheduled already is for Toronto at Dundas square by 11a.m Ottawa, Saskatchewan, Halifax, Newfoundland, Calgary, Winnipeg et al will also hold their protest rally simultaneously. Xphrame media will be there live to bring to you sights and sounds from the protest.
If you reside in Canada and want to join the conversation click the link below and join the Telegram platform.
https://t.me/joinchat/HgvXrBkKyqRq_FZ2VMLJxg
Stay tuned.For inquiries reach out to info@xphramemedia.com