7 AMAZING FACTS ABOUT THE LIVING LEGEND OSAYOMORE JOSEPH THAT WILL MAKE YOU ATTEND HIS LIVE EVENT IN CANADA.

Abedorc Media has taken over the air space with another Epic scheme which we best describe as reverberance of Highlife music, the event planner and consultant of high repute who recently held the 9th Edition of his annual awards has October 25th fixed for an International High life musician Ambassador Osayomore Joseph live performance. 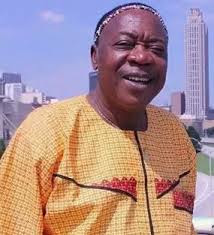 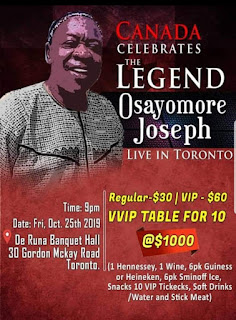 Xphrame Media updates decided to dig further some amazing facts about the Legend that will make you want to attend his life performance on stage.
Enjoy our findings. 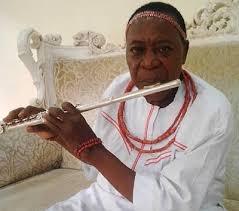 We spoke to the management of Abedorc Media the rationale behind the event, Chief Yinka Farinde said Legends of this nature ought to be celebrated and he intends to create a very scenic core high life ambience where the people can feel the originality of the beats. He described the High life Maestro as the best with his over 104 Songs released. 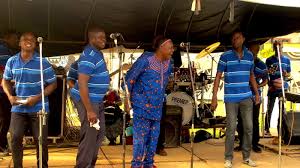 He called on all Nigerians especially people from the Middle belt region of Nigerian to come out with their family and have a family weekend listening to the Legend live on stage.
He added that the Ticket is available on ticketgateway for $30-Regular,$60-VIP and table of 10 VVIP for $1000. You can call 416 835 3133 for express booking and reservation.

Below is a summarized biography of this Legend.
Osayomore Joseph is an ace Nigerian highlife musician, one of the early pioneers of Africa popular highlife music, His albums has been cited by international publishers, libraries and entertainment websites, all round the world, alongside artists like King sunny Ade, Sir Victor Uwaifo.

Born in Benin city (Edo State), He left secondary school in the early 60’s. In 1969, at 19 years old, he joined the military at the tail end of the Nigerian Civil War, where he began his music training as a member of the military's band, studying flute, guitar and piano.

"Fela's Shrine was directly opposite my military school, in Lagos," Osayomore says, referencing the storied venue where Kuti regularly held ecstatic court. "I was very close to him. I would sit with him when he was blowing his sax and I was blowing my flute."

The ace musician was abducted on the 3rd October 2017, by unknown armed men along Upper Ekehuan road in Egor Local Government Area, Edo state, on his way home from a musical performance along with his wife, at about 10 pm. His wife sustained a gunshot wound on the head during the kidnap; she was moved to a hospital where she responded to treatment. His captors demanded a ransom of N200m (Naira)  for his release, he regained his  freedom on 2nd of November 2018.Osayomore's reputation as a freedom fighter, an activist musician with a long history of criticizing corruption in local and national politics