The much promoted annual Ankara Festival has come and gone, it was so much hyped that one would believe that Late legendary Michael Jackson would be resurrecting to attend this year’s edition.

The last 2 weeks has been all about Ankara Festival On Radio stations, on Facebook, on WhatsApp, on Instagram, on newspapers etc.

The last one week was characterized with on air advertisement and interview from the Team members.

While we have been in the dark about the Team member’s identity, they were eventually revealed on the event day in a colorful manner with an Ankara designed Cake that was awesome. The Team was a super combination of various professionals in the Entertainment Sector.

Back to our gossip role of evaluating events,2019 Ankara Festival was an improvement from the previous years and we score them high based on logistics.

The Ankara Fabric which is an African Pride was the order of the day, flaunted in various styles and designs. You need to see Gorgeous appearances from various Fashion houses.

The event went smoothly and orderly with many award recipients who turned up with family and friends.

The Artiste promoted all attended and they performed to the thrill of the audience who enjoyed their performances.
They were food and drink stands by vendors who all attended the event.

But Canada Event ratings however still saw some flaws with the organization and you know it is our duty to expose such flaws with the objective of helping our community enjoy best of event.
First observation was that the Hall was too hot and one will wonder if Paparazzi Event Centre had an Air cooling system.

Secondly the DJ and sound engineers where not at their best hence making the event almost itchy except for the professionalism of Iyameto and MC- Akeem Ogunmilade they would have been a damp in spirit of audience at certain points.

Apart from this observations everything went well as compared to the previous editions.
While congratulating the Afro Heritage Team we equally admonish them to keep the Team work up.
CER tried reaching out the Core Mantle Omo Alade Ogo on Sunday to get words from him about the details of the event but he said they had a Team Meeting already looking at all the loopholes observed in the 2019 edition and that the Team was already putting in place the 2020 Edition work plan in order.

In our over the phone interview with Mrs. Bosede Ajiboye another Pioneer Senior member of Afro Heritage International she said she was overwhelmed by the turn out and optimistic that the next edition was going to be better as there was serious improvements from previous editions and still room for improvements.

In a text response from Mr. Babatunde, he said very soon Ankara Festival will be an annual event in various Provinces where African Communities reside.
Lady Estella who managed Security and internal Logistics said the event broke even and prospects were met.

Canada Events ratings described Mr. Doxology’s performance as the event highlight, the Tungba exponent was at his best, the guests trooped out to the dance floor to enjoy his beats and the rain of Dollars continued for hours. 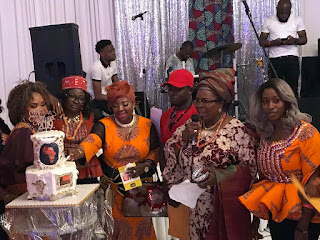 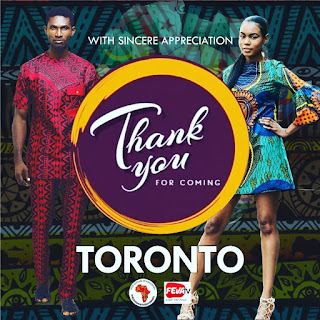 We hope and wish them greater annual series ahead.